Typhoid in infants often remain unrecognized due to atypical clinical picture.
The infants are more susceptible to typhoid as has been revealed by various studies. The Typhoid Vi Conjugate vaccine have been demonstrated to include ‘T’ Cell dependent response with much higher antibody. The conjugate Vi antigen vaccine also elicits booster response as is common to all conjugated vaccines.

Peda Typh™ is indicated for active immunization against Salmonella typhi in infants of age ? 3 months, children and adults.

One dose followed by booster after 2½-3 years of primary vaccination. Vaccination can be done from 3 months age onwards .

As for any product, there may be more or less moderate and temporary side effects like: – Pain, induration, erythema, purities at the injection site. – Rare, transient febrile reactions. – Paracetamol or Ibuprofen cover for 36 hours after vaccination shall decrease the intensity of side effects.

Store between +2° to +8°C in the refrigerator. Do not freeze.

The shelf life of the product is 36 months from the date of manufacture if stored at recommended storage conditions.

Introduction
The studies were undertaken to assess the immunogenicity and safety in infants and older children of a new vaccine-Vi polysaccharide conjugated with Tetanus toxoid protein. This new technology has avoided the use of recombinant proteins for conjugation. The vaccine has passed the required safety & immunological parameters in animals. The permission to conduct clinical trial Phase III in human was cleared by the Drugs Controller General (India) after necessary evaluation.

Based on the above data, the principle investigators concluded that Peda Typh™ (Vi Conjugated Typhoid vaccine) was safe & well tolerated in all age groups including infants.

Immunological Response
Evaluation of Immunogenicity :
Blood samples(1-2ml) were collected by venipuncture before vaccination on day 0(pre-immune) and 4 weeks after vaccination (post immune). lgG anti Vi antibodies were detemined by ELISA.

ELISA test : (Assay for assessment of immune response in paired serum samples) ELISA test kit was validated and calibrated as per the guidelines of good laboratory practice. 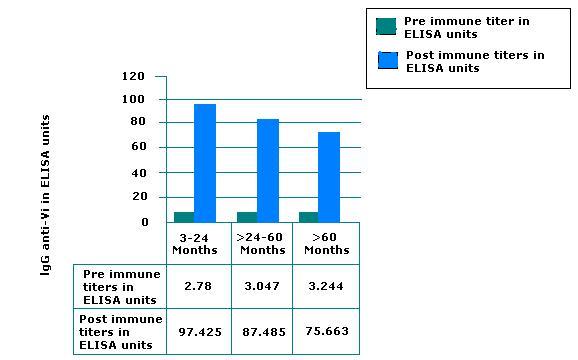 Preparation of standard reference curve and calculation of lgG antibodies was done by program of ELISA version 2.0, Centers for Disease control , Atlanta(USA).

Biostatistical Analysis : Biostatistical analysis of the clinical trial of Peda Typh™ was done by Dr.R.M. Pandey Ph.D.,FRSS(U.K.),Professor and Head, Department of Bio-Statistics, All India Institute of Medical Sciences ,N.Delhi. Biostatistical analysis proved that Peda Typh™ vaccine is safe and immunogenic. The antibody titers of the sera from 100% of the subjects (from all three centers) showed a four fold or greater rise in antibody titer of each group after immunization .No statistically significant differences were found in male and female children.

The Vi conjugate typhoid vaccine (Peda Typh™) under clinical trial have been found to be highly immunogenic in infants and children less than 2 years of age in which unconjugated Vi polysaccharide typhoid vaccine is known to induce very low or nil immunogenic response.

The efficacy of Vi conjugate typhoid vaccine in clinical trials conducted in Vietnam have been found to be 89% over the 46 months period.

On comparing the data of clinical trial of Vi conjugate typhoid vaccine developed by N.I.H (Published in The New England Journal vol.344 no. 17, 2001 pg.No.1263-1269) with Peda Typh™ , it was found that the geometric mean post immune lgG(25-75 percentile) are statistically equivalent.

Immunizations not only prevent mortality and morbidity. They also reduce the expenditure of public and private resources. The latest generation Vi conjugate typhoid vaccine is an effective tool to control the emerging pattern of typhoid fever in children and infants <2 years of age.

The studies have been published in :

The highlights of the result of the studies are as under :